Status
Not open for further replies.

VOC Member
Well, that's plausible, at least in the absence of another explanation - conspicuous consumption. Still, I think the tactic is at risk of backfiring. Most collectors value the factors listed earlier, but are less impressed with ego-driven displays of wealth.

LoneStar said:
Most collectors ... are less impressed with ego-driven displays of wealth.
Click to expand...

Whether or not other collectors, rich or poor, are impressed with the display of wealth, the question is if it is one of the motivating factors for many rich collectors. I would argue it is.

VOC Member
Is the Jack Ehret Lightning worth what it sold for recently? Would the recent seller pay that amount to get it back again.

VOC Member
Factors not yet mentioned in owning a Vincent for me
My initial ownership cost under £100 for a non matching twin
My knowledge gained over many years ownership means it's useful and easy to run and maintain twin or single.
Stocks of parts built up means lower running costs
All my VOC connections
It's resale value with those considerations is not a great concern neither is what was stamped on the metal or strict adherence to standard
And remember ownership does not preclude owning a modern bike

VOC Member
These bikes should without a doubt be worth every cent........Look at the crazy prices some exotic cars fetch........ The owner of the Ehret Lightning would most certainly pay the same again, whoever was bidding against him was also in the same chase. For something as practical as a bike, they are not that expensive by comparison to other investments.......My thoughts about all of this....... Enjoy them while you can....... The day will come when you can no longer.

VOC Member
VOC Forum Moderator
I was asked a year or so ago to confirm the numbers on a Vincent looked correct and matched which they did. The buyer then asked if the VOC had ownership history of the bike going back to new, of which we did not. He then reponded that as as full ownership history was not known he was not interesed in the bike and so did not buy it. This sort of agrees with what Magnetoman says above about in postings #60 & #62 that their reason for looking at buying a Vincent had nothing to do with riding motorcycles.

VOC Member
It's all just words, Who can you believe, The first owners Son of my first Twin, Made contact via this Forum,
And said Mr Vincent was a friend of his Dad and that Phil Vincent road my Bike,
Yet it's a 1950 Rapide, And I have since read that Phil Vincent stopped riding in 1949 after a crash from a bad gearbox ?.
Too many years have past to say what is right and what is wrong, When you read that Engines have gone back and had the Cases changed when almost new, Apart from Blow ups !, And Crashes with Frames being changed,
I have read that there are a lot of rear frames with no number, So is that better than a restamp ?.
As long as they are not stolen, Who cares about numbers, If in doubt ask Simon.

VOC Member
Yes the restamp... I recall doing that back in the day. Working at a motorcycle dealership when replacing a frame or crankcases. That was the way it was done at the time. My NOS twin cases are going to remain without numbers.... to me they seem more interesting without them.

VOC Member
Don't you need numbers for insurance ?, And if the Bike was stolen, How would you know they were yours if found, I must admit it would put me off buying new cases, Not that I have enough money.

Bill Thomas said:
Don't you need numbers for insurance ?, And if the Bike was stolen, How would you know they were yours if found, I must admit it would put me off buying new cases, Not that I have enough money.
Click to expand...

Well it has rather unique case mating numbers that Simon is aware of albeit unofficially. Only a frame number required for insurance here. I have thought about making sure they have some other unique markings and then ask Simon to keep photos on file. That way I can prevent an extended stay in the Crowbar Hotel and there will be a record for any future owner. If anyone asks about the missing number I’ll just tell them it’s Gunga Din’s long lost twin brother. 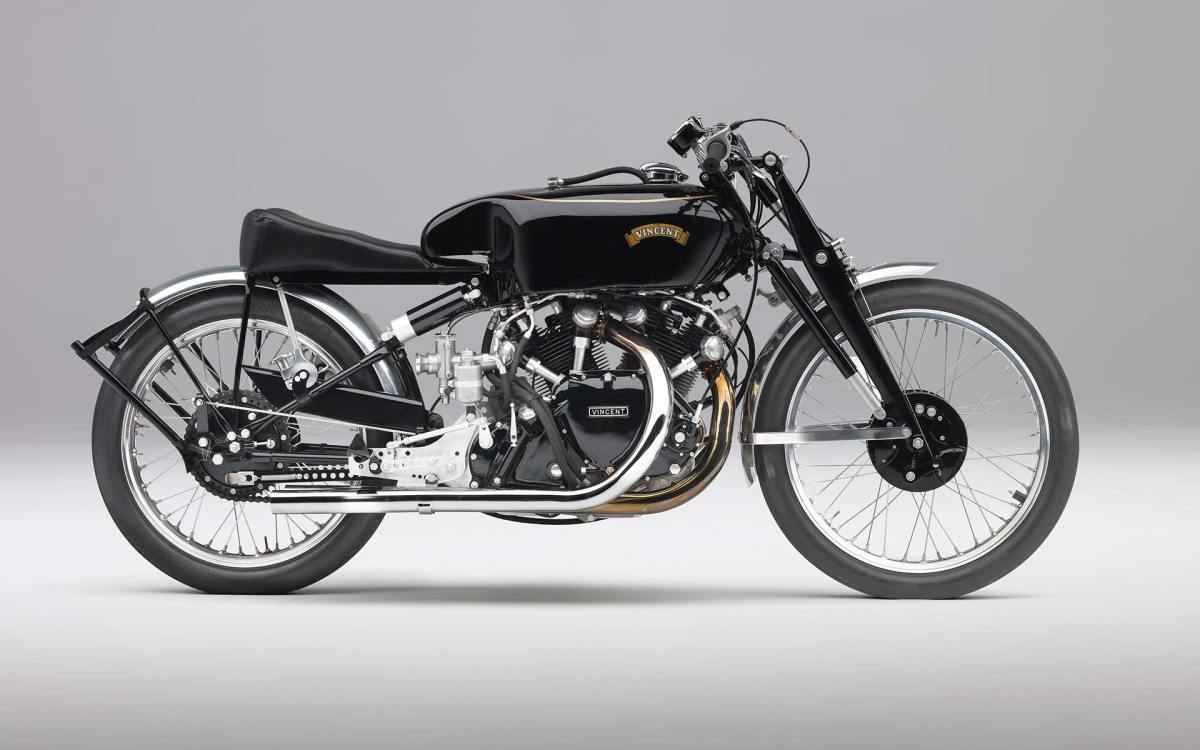 Gunga Din, a Legend that moved from the Shadow to the Limelight

Vincent owners have always maintained close relationship with their ride and numbers of those bikes got a nickname along the road or the track: “VinnyLongLegs,” “Sir Lancelot,” “The Fas…

VOC Member
Bill,
I don't know about Canada but state side the number on the head stock is all that counts for titling and registration. The engine number doesn't appear on any titling or registration documents. All I need for insurance is the number on the head stock.
I've bought a number of bikes over the years with no title and just a bill of sale. Asked the local police to come out confirm the head stock. Taken the bill of sale and police form to the Secretary of State, handed them my money, they confirmed the bike wasn't stolen or not reported as such in the last 7 years and issued me a title for it. When I was ready to put the bike on the road, I called my insurance carrier they asked for the head stock number, I gave it to them as it appeared on the title, paid my money got an insurance card. Took the insurance card to the SoS along with the title, paid more money and got a plate.
If engine swapping were a big deal here, hot rodders would be up to their collective eye balls in the brown stuff.

VOC Member
Maybe I will have to move !!, We have just been told there will be no more cars other than Electric made in
UK after 2035, So what chance do we have in running our old smokers ?. The world is MAD
G

VOC Member
From what I've witnessed on the Norton site- every US state is different in regard to registration without existing title. Some are very easy while other states make it nearly impossible to register without old title in hand.
This explains the value of old, unused titles from wrecked and parted out bikes. A number of those have quietly changed hands. New unstamped frame plates are available at Andover Norton.
Sometimes you have to sneak around like a criminal just to have a bit of fun!

VOC Member
I read that the other day either in "MG Enthusiast" or "Thoroughbred and Classic Cars". First thought I had was how long will it be before the use of non-electric vehicles is either restricted or banned outright? The following thought was how will that affect the loads of industries built around the concept of personal travel? They may not be wiped out but I'm sure they will adversely affected.
G

VOC Member
In North America 80% of electricity is generated by Fossil fuels.
In many areas, switching from a Gasoline powered vehicle to electric means switching to coal power, which puts a lot more crud in the air.

VOC Member
Years back I bought a 500 Triumph in a wheel barrow off of a friend of my father's who got it in a deal in Alabama. All he had was the registration slip from 'Bama to give me. I showed that to the police when I did my title search and a signed letter how Howard had acquired it. $25 and two weeks later I had a title. When I was in college I was restoring a Triumph TR4A. I needed some inner body panels as mine were rusted beyond repair. I found a wrecked TR4A. Two weeks earlier it had been freshly restored when a cement truck took a corner to fast and flipped on top of it. Lucky it was parked and unoccupied at the time. Anyway we cut it up for the panels we wanted. Then cut it into even smaller pieces to dispose of it. I kept the VIN plate and title and sold it on to an acquaintance of mine who was restoring a TR4A he had bought without title.

Glenliman said:
In North America 80% of electricity is generated by Fossil fuels.
In many areas, switching from a Gasoline powered vehicle to electric means switching to coal power, which puts a lot more crud in the air.

But if you point that out to the majority of tree huggers they look at you like your crazy or want to label you as an irresponsible planet killer. They are blissfully unaware that fossil fuels provide the majority of electrical power be it coal or natural gas. The carbon "foot print" doesn't disappear with the change to electric vehicles it merely gets relocated to someone else's backyard. I find it hard to believe that wind turbines or hydro will provide enough power to meet the needs of the current population. Add to which opposition to wind farms because birds have rather suicidal tendencies and play chicken with the blades. Bring up nuclear energy and everyone has a meltdown.
Every option has downfalls, there is no perfect answer. We just have to pick our poison as it were.

Bill Thomas said:
The world is MAD
Click to expand...

That's true, as evidenced by the fact we are doing too little about air pollution and essentially nothing about global warming. India has 15 of the 20 most-polluted cities in the world, which has a direct connection to the fact 60% of their fuel consumption is for motorcycles and scooters. Solar, wind and hydroelectric are better, of course but, even if fired by fossil fuels, large scale electric plants are more efficient than small internal combustion engines, and can be sited far from the concentrated populations of cities.

I wish there were no serious negative consequences of internal combustion engines, but only at Disneyland do wishes come true. A truly unfortunate side effect of social media it that it has given the same, or more, weight to nonsense as scientific fact, hobbling our ability to respond appropriately to several major issues. Anyway, electric vehicles are a glimmer of sanity, not evidence we're mad.

How the transition from fossil fuels to renewable ways of generating energy will affect our old dinosaurs remains to be determined, but don't lose sight of the bigger picture.

This post is definitely related to the thread since the transition to electric will affect auction prices in the future.

On the subject of getting vehicles titled, three years ago in Arizona I had no difficulty getting a title for the 1928 Ariel I used in the Cannonball, which was sent to me from Ireland via England. I actually did have paperwork from Ireland but a little research convinced me it would be simpler if I pretended not to. I hauled the bike to a titling service licensed by the DMV where the numbers on the engine, frame, and gearbox were inspected and photographed, and entered into whatever database the State uses to check for stolen vehicles. It came back clean and I left with a title, registration papers, and a license plate.

VOC Member
They say the electric cars after a crash can just blow up , So the Police etc won't go near them !.

Magnetoman said:
A truly unfortunate side effect of social media it that it has given the same, or more, weight to nonsense as scientific fact,...
Click to expand...

Bill Thomas said:
They say the electric cars after a crash can just blow up ,
Click to expand...

Status
Not open for further replies.

Can't Find What You Need?